Marc Berthier is best know for his designs for French design company LEXON. He was granted « Le grand prix National de la Création Industrielle » and was awarded twice the « Compasso d’Oro » in Italy. He has also received « Le prix Gabriel » and the « Médaille de l’Art et l’Industrie » in France, the « Design Plus Award » and several times the « Form Design Award » in Germany, the « New York Accent Design » in the USA. His creations appear in the collections of the National Museum of Modern art, the Museum of Decorative Arts and the Fond National d’Art Comtemporain in France and the Museum of Modern Art in New York.

Bialetti is the best known brand name for stove top coffee makers worldwide. In 1919 Alfonso Bialetti established a metal and machine workshop to make aluminium products, this was the foundation of the Bialetti company.  Endowed with an entrepreneurial spirit, he transformed his workshop – Alfonso Bialetti & C. Fonderia in Conchiglia – into a studio for the design and production of market-ready finished goods. Thanks to the brilliant intuition of Alfonso Bialetti and the inventor Luigi De Ponti - who developed and patented the now famous Moka Express stove top coffee maker for the Bialetti company - in 1933 the Moka Express  saw the light of day. It subsequently became a style icon and is still produced today. It is exposed in many modern industrial art museums such as the Museum of Modern Art, the Cooper–Hewitt, National Design Museum, the Design Museum and the London Science Museum. Many current models derived from this original design. The Art Decò design of Alfonso Bialetti's son Renato was to revolutionize the way of making 'caffe' at home and the success of the Moka Express immediately establish the company as one of the leading Italian manufacturers of coffee makers. Between 1934 and 1940 the humble Moka was only marketed locally - sold by Alfonso at the weekly markets in Piedmont. In these six years he only produced 70 000 units. By 2001 a total of 220 million units had been produced and to date the number has reached about 330 million. During World War II the rising prices of coffee and aluminium stalled production of the Bialetti products. It was not until Renato, Alfonso’s son, took over in 1946 that the Bialetti product line was narrowed down to a single product: the Moka Express. A huge multi-faceted marketing campaign was initiated by Renato. It incorporated television, billboards which saturated the streets of Milano and even the creation of a giant statue of the Moka Express coffee pot. Copy-cat designs were infiltrating the market by now and advertising turned out to be a key strategy in defining the success of the Moka and ensuring the popularity of the Bialetti brand. L'omino con i baffi “Little man with a moustache”  - the Moka mascot – was based on a humorous cartoon doodle of Alfonso Bialetti. The initial sketches and logo were created in 1953 by Paul Campani. It became its symbol and is still as part of the Group’s trademark on its products to this day.

1)    Fill up the base of your Bialetti with water until just below the safety valve. For best results, use filtered water.

2)    Insert the filter funnel. Add coarse ground espresso to the filter until the grounds reach the rim. Tap the bottom of the base with filter lightly on the counter top to ensure even distribution. Do not pack the grounds tightly. (Hot water can not pass easily through tightly packed grounds, resulting in the build up of potentially dangerous amounts of pressure.)

3)    Screw the top of the coffee maker to the base and place it on your stove top. Use low to medium heat on an electric stove top or medium to high heat on the smallest gas burner (but make sure that the flame does not come above the rim of the heater unit).

4)    When you hear the characteristic gurgling sound, all the water from below has made its way into the top section. Remove the Bialetti from the heat and pour your espresso. 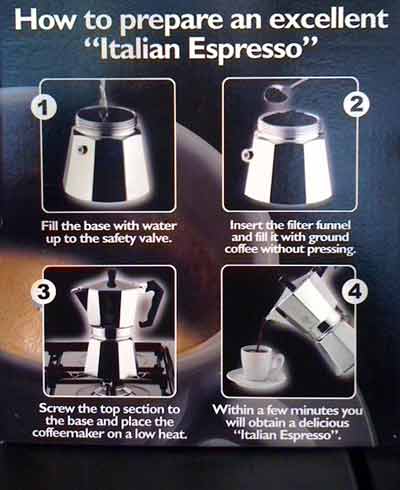 1)    Fill the container of the Tuttocrema Frother 1/3 full with either cold or hot milk (best fat reduced milk of about 2% fat content).

2)   Replace the lid. Pump the plunger to whip the contents to the required density.

3)   Remove plunger and gently pour the whipped contents onto a cup of espresso coffee to make cappuccino, flat white or similar drinks or over fruit etc. if cream is used.